Lucky Bamboo .... I guess I was  not so lucky as this plant did  not seem to want to grow for me until recently.   I  actually have this plant  for two years now but  it never showed much growth. during its  first year .  Maybe I was a bit  too impatient. 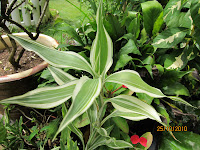 This is the original plant that I grew from a cutting. Since it was growing so slow initially, I thought perhaps the medium is no good, and changed the soil .  I also moved it to a more sunnier spot,  under partial sunlight,  beside my waterlily pot for more humidity.  It fared better.  Earlier, it looked really miserable, perhaps the soil was too hard and I probably watered too much, so the roots get soggy and unhealthy. With the fresh soil mixed with some sand,  I guess the drainage is better and I did not water too much. I guess it likes its new location and there are  baby plants coming up as well by its sides. 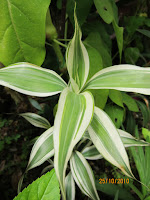 I decided to  re locate a baby plant to the  ground under the murraya paniculata (see blog on Jasmines dd : 23rd August 2010).    I thought it would look good as a short hedge beside the murraya; add some color to the area there.   So far  it seems happy there and growing well under the shade. Just that sometimes I forget it is there....lol.


There is another variety that is plain green, but I prefer this variegated plant. This plant is also called the "Ribbon Plant." This plant propagates easily from cuttings.  Like other Draceana, the plant tends to grow straight upwards, so to encourage the plant to branch, it needs to be cut. Baby plants will come up from its roots as well, so when the pot gets overcrowded, re-potting is necessary to maintain a healthy plant.
When Chinese New Year comes around, this plant is sold everywhere.  They like to make this plant into decorations, tied with gold and red ribbons.   For  people who likes to hold on to traditions, this plant makes a good gift as well during  Chinese New Year.  It is listed as one of the good Feng Sui plant to have for Chinese New Year.
Posted by Sun-ni Mi-ni Gardener at 3:32 PM

Sun-ni Mi-ni Gardener
As a child I was fascinated by plant growth, to see a seed take root, grow and change. I am glad that I finally have the leisure to observe growth of plants in my garden. Somehow one learns to be patient when gardening. I feel the plant is always in control rather than the gardener and this is a fascinating thought.